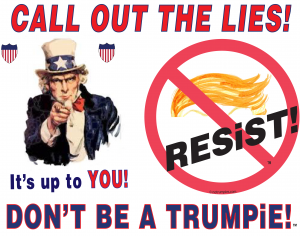 Don’t you just love the Trumpies’ assertion that we should respect the “alternative facts” of our new President? He says three million “illegals” who voted cost him the popular vote. It wasn’t Americans, it was illegals. I have wonder if this is just another narcissistic delusion in his mighty brain, or a calculated attempt to give cover to an even more aggressive effort by Republicans to suppress the vote that was contrived in the shadows by President Bannon. Propaganda takes many forms, and makes no claim to being true.

Now I know that history as a required subject has been downgraded since I was a kid, and that the great majority reading this probably have no idea who Joseph Goebbles was, and even fewer know anything at all about Steve Bannon, myself included. The two of them have much in common. Goebbles was Hitler’s master of propaganda who basically wrote the book on political propaganda; his most famous saying is, “If you tell the same lie enough times, people will believe it; and the bigger the lie, the better.” Steve Bannon, who from all reports is a kind of RasPutin to The Donald, seems to have studied Goebbles and practices his methodology to a high degree. He now seems to be calling the shots in the Oval Office and taken public discourse into the Twilight Zone by decreeing the reality of  “alternative facts.”

My first novel is written in the genre known as “alternate history,” which made it a lot of fun to write because I was able to make history come out the way it should have. Poetic license, doncha know. It is set in a universe where there was no Vietnam War and a “good” Richard Nixon is fighting the Arab oil embargo and trying to make America energy independent. I was pissed at the stupidity which followed the end of WWII and tried to imagine a world that easily could have been had not  politicians totally screwed it up. Yes, my parents’ generation deserves to be known as the “greatest generation” for surviving the Depression and the victory of World War II, but they blew it on several fronts, and the one that caused the greatest damage was the stupidity over the war in Vietnam. But I digress.

Today (2/1/17)  comes news that a new Dove deodorant campaign based on the concept of “alternative facts,” claiming Dove “increases your IQ by 40 points,” “rhymes with orange,” and “boosts your Wi-FI signal.” This is genius advertising.

The NoTrumpZone will soon be up as a “store” on CafePress as well as on Zazzle. We never thought we’d ever have to mention the word “trump” after the election, but here we are. It’s like I pulled a bad draft number. I could claim an infirmity or desert to Canada. No way. I’ve watched Trump through the decades, and he has always been a TOTAL F***KING A**HOLE!

That’s what really counts in this discussion. Cannot we all agree that he has always been a TFA? Even those who voted for him will have to admit, for the sake of their own honesty, that Trump’s a TFA. Right?