It’s interesting that so many religious evangelicals, such as the son of Jerry Falwell, Jerry Jr., and the son of Billy Graham, Franklin (both of whom, like Trump, inherited lucrative empires from their fathers), are firmly in the Trump camp. What with his multiple wives, each one younger and hotter than the last, and his hedonistic casinos one would think that True Believers in “family values” would be appalled at jumping into bed with the likes of a sinner like Trump, but there they are. 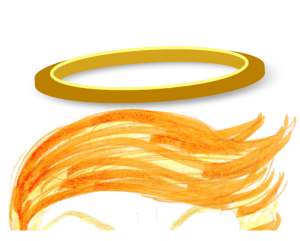 As to his own beliefs, Trump grew up as a Presbyterian, and during the election he chided Ben Carson for the strange beliefs of Seventh Day Adventists and touted his own denomination, saying, “I’m Presbyterian . . . Boy, that’s down the middle of the road folks.”

Now I too was baptized as a Presbyterian, a denomination founded in the 1550’s in Scotland, the land from which both Trump and I derive much of our heritage. The dour Scots took the ideas of the Protestant Reformation much more seriously than most other peoples. The church was started by the fiery preacher, John Knox, who hung around with John Calvin in Geneva debating Reformation theology before founding the Presbyterian church and converting most of Scotland.

Those original Presbyterians firmly believed in the Calvinistic doctrine of “predestination,” which to me helps explain why Trump doesn’t know his John from his Genesis. For example, Trump, in a speech at Falwell’s Liberty University, was touting his Biblical knowledge when he asked the crowd: “I hear this is a major theme here, ‘Two Corinthians,’ right? Two Corinthians 3:17, that’s the whole ball game.” The evangelical audience, which knows the famous phrase as “Second Corinthians,” laughed at Trump’s Biblical ignorance but still gave him a big ovation.

The way I interpret the theology, Presbyterians don’t have to actually GO to church, though if you do go religiously you are probably one of the “Elect.” There are no guarantees of course, but if you make it to old age and are faithfully attending every Sunday it’s a strong sign that YOU have been selected to hang out with Him in Heaven. Another sign that you’re among the Elect is financial success, because having a lot of money shows that God has chosen you.

Unlike the Catholics, Episcopalians and many other denominations, Presbyterian polity is governed not by a priesthood but by the elders of the church, the “presbytery.” The church takes is name from the prefix “presby,” which comes from the Greek and means “old” or “aging.” I only learned the origin of the word when I was forty-three and developed a condition I’d never heard of before: “presbyopia,” or “old eyes,” and got my first reading glasses.

When I was eleven or so in Communicants Class our minister explained predestination something like this: God is Omnipotent, which means He is “all-powerful,” as well as being Omniscient, which means He is “all-knowing.” Therefore, being all-knowing, God knows everything that ever happened and everything that ever will happen. No exceptions. What this meant to me was that you can’t earn your way into heaven by doing good deeds and living a moral life. Nope. You are either one of the Elect from the get-go, chosen by God since before the beginning of time to join Him inside the Pearly  Gates, or you didn’t make the cut and are destined to spend eternity roasting in the fiery cauldron of Hell. God already knows everything (that’s what being Omniscient is all about), because if He didn’t He wouldn’t be Omniscient and therefore couldn’t be God, right? The logic made perfect sense to me.

As Star Trek’s Mr. Spock might have explained it to Scotty, another Scot and therefore probably a Presbyterian: “It is all quite logical, Mr. Scott.” Come to think of it, Dr. McCoy is also of Scots descent, and in Scottish dialect “kirk” means “church.” Hmmm… So Captain Kirk, Dr. McCoy and Chief Engineer Scott are all Scots and therefore probably Presbyterians, or at least descended from Presbyterians. It makes sense as the Scots have been famous throughout history for being adventurous and brave and would be ideally suited to exploring the final frontier. And their constant good fortune is a strong sign that they are among the Elect.

What I think predestination means for ordinary Presbyterians is that while it’s all well and good to show piety and know the songs in the hymnal by heart, it isn’t really necessary because it won’t make any difference in where you spend Eternity. To my eleven-year old brain, it seemed that if your fate is predestined no matter what, then why waste half a day in Sunday school every week when you could be playing baseball or swimming?

Of course modern Presbyterians have watered down the strict Calvinistic ways to keep up with the times and now accept Santa and Christmas trees like most Christian denominations, but the notion of predestination is still hanging around the theological rafters.

So if the Calvinistic theology of the original Presbyterians is correct, you are predestined for Heaven or Hell no matter how you live your life. I figure Trump, who is about my age, must have learned about predestination in Communicants Class about the same time I did and decided that he may as well cut out of Sunday School as often as he could and play golf, which would explain his lack of Biblical knowledge. As for whether he’s predestined make it through the Pearly Gates, heaven only knows.

Note: a version of this was originally posted April 26, 2016 when Trump’s candidacy was still a joke.