Nov. 22, Update: I have not seen a single reference to the fact that today is the anniversary of the assassination of President John Kennedy, in 1963.

Okay, I’m screwing off again. The election is over but I’m still coming up with bumper stickers when I should be doing marketing and trying to sell for the Holiday Season, or maybe compiling my blogs, drafts, and thoughts for Play Nice, Don’t Be a Trumpie!, which looks like it is my next project.

I’m sixty-eight, and if the actuarial tables are right, I’ve got eleven years before the Grim Reaper shows up. But right now my question for myself when I think of my obligation to posterity is this: did I do enough to defeat Trump? I certainly tried in my own, off-the-wall, half-assed way, didn’t I? I came up with a slogan, graphics for a dozen bumper stickers, a patriotic song parody, and a flurry of opinionated blogs, all to no avail.

I thought Bernie Sanders had the best vision for the country, but voted for Hillary in the primary because I thought Sanders would be eaten alive by conservatives for being a “commie,” a miscalculation made by me and ten or twenty million others. Maybe I should have gone out and knocked no doors or volunteered on a Get-Out-The-Vote phone bank, but instead I did on my own what I hoped might amplify my single voice and single vote. Having come of age in the Sixties and felt the power of protest songs, I’ve always thought that a writer or a songwriter could have an out-sized influence on public opinion, having taken to heart the Chinese proverb: “It’s not those who write the laws who run the country, it’s those who write the songs.”

I wrote my first political song back in the early Eighties and drove around to open mics trying to defeat Ronald Reagan. That didn’t work any better than my internet efforts this year. I just checked on the stats for my YouTube song “When Donnie Goes Trumping Home.” It was posted three months ago and has received all of 175 views! Hot damn! Other songs, parodies and such about Trump have viewers in the hundreds of thousands.

I’ve clearly been doing something wrong in my internet promotion efforts. I was astonished at today’s reports about fake news on FaceBook that claim that the election was swung by fake new reports by Trumpies from places like Macedonia (Macedonia?) which somehow overwhelmed real news on tens of millions of FaceBook feeds. Today some guy is bragging at making $10,000/month posting fake news blogs that appear in millions of FaceBook newsfeeds and credits himself with swinging the election. So here’s a guy claiming to make $10k every month posting completely phony news stories seen by tens of thousands and my stuff is lucky if it is seen by dozens. I clearly have a lot to learn.

On a positive note, I have learned a lot, and the “Official NoTrumpZone Sign” could yet play a part in thwarting the Trumpies. Maybe it’s a good thing my site and videos and tweets and blogs and songs and novels have so far been ignored. If the Trumpies thought I was making any kind of impact I’d be inundated with hate mail. I’m absolutely certain the Mussolini-Trumpolini graphic I came up with for this post will not go over well with the clean-shaven, alt-right conventioneers that today’s news says were meeting at a fancy hotel a few blocks from the White House, where they joined in denouncing Jews and anyone of non-European descent and celebrating their hero’s win with outstretched Nazi salutes and cheers of “Heil Victory.” 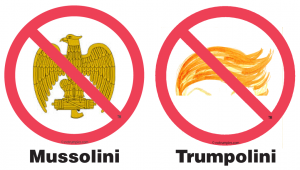 Another Chinese proverb, one considered to be a curse, says: “May you live in interesting times.” Our times are about to get very interesting in a way that does not bode well for the future of America or the planet.

On different note, and just for posterity, here are the lyrics to “The Great Deceiver,” a parody sung to the tune of the 1950s hit “The Great Pretender.” At the time I wrote it (1983) the press was calling Reagan “The Great Communicator,” a takeoff on Native Americans’ “Great Spirit” made famous by TV and movie westerns. The head chief of the Sioux tribe said it was more accurate to call him “The Great Deceiver,” and after reading that I came up the the following lyric. It looks as if Trump will soon surpass Reagan in terms of “greatness” as a deceiver, so maybe this lyric will be updated before too long.

The Great Deceiver
(Sung to the tune of “The Great Pretender”)