Trump needs a nickname, and America needs a sure-fire, sing-along song to energize the crowds in the campaign to defeat him. A new parody, “Donnie Dough,”or “Hey Donnie Donnie,” does both. It is based on a tune written by Woody Guthrie as “Hey Lolly Lolly” and was recorded by Pete Seeger, the Limeliters and others under various titles in the 1950s and early 1960s.

Many who were growing up in that era will remember it as a sing-along and making up spontaneous verses at summer camp, or on school outings with everybody singing on the bus. It was a sing-along era in the folk music revival, with hootenanies everywhere. An R&B dance version by Chubby Checker, “Hey Loddy Loddy,” hit #12 on the Billboard Top 100 in 1963. Trump would have been a sophomore in high school, so he certainly knows it. You can hear an excellent collection of the previous versions by other artists to give you ideas for your own verses here: http://www.songswithearlierhistories.com/loddy-lo/

in my opinion, this makes for a great political song. A simplified version, where the audience sings along and people take turns making up verses, cou 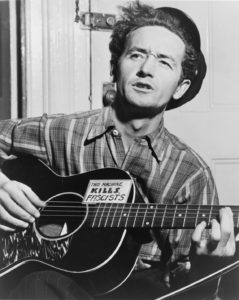 ld get the crowds going (though it could also get a little raunchy if people speak their minds). If you’re a musician, or involved in the political world, click the link above and listen to how Pete Seeger and the Limeliters get the audience involved and imagine it in a political context with your favorite candidate leading the crowd. Somebody like Beto could pick up a guitar and lead it himself.

It could be a unifying theme if all the candidates use it despite their differences. And imagine getting under Trump’s thin skin by giving him his very own nickname! (nobody has ever hung a nickname on him) and giving his opposition an easily-singable song to chant at him whenever he shows his face. It could be fun!

Many thanks to the WoodyGuthrie.org foundation for permission to parody one of Woody’s songs in the effort to defeat Donald Trump. Given that Woody’s song “Old Man Trump” is about Donnie’s father, I’m prettty sure Woody would get a kick out of it. Like father, like son. Here are Woody’s first two lines: