Last week Trump gave a speech in Pittsburgh to the oil and gas honchos in the shale-oil extraction industry, then he had a fundraiser at the elite Duquesne Club, whose alumni include the likes of Andrew Carnegie and generations of Mellons. Both of my novels are largely set in the Pittsburgh area, “back in the day,” as they say, when the draft ruled the choices of every male my age. 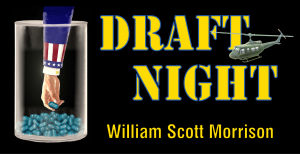 said that avoiding venereal diseases like herpes, the clap and AIDS during his hedonistic, rich-kid-on-the-loose heyday in the ’80s was “his Vietnam,” and that John McCain, whose plane was shot down and who spent years as a POW, was not really a war hero because he’d allowed himself to be captured and Trump only likes “winners.” I am amazed that so many veterans seem to be enamored of Trump despite his bad-mouthing McCain, his disparaging a Gold Star mother whose son was killed in Iraq, his assertion that America’s generals have been “reduced to rubble,” his buddying up with Putin, his promising millions for vets but not following through and, worst of all, threatening to privatize the Veterans Administration health care. There’s absolutely nothing I can see in Trump that deserves the support of veterans.

I’d been looking for a news hook to introduce this story when his his Super PAC came out with an ad starring none other than Ted Nugent, who, like Trump, is a notorious, self-promoting braggart. Back in the ’70s, he went on record as being proud to be draft dodger. At the time, being anti-war was cool, and nobody was ever cooler than Ted Nugent. You can ask him. He’ll be happy to tell you.

Nugent has stayed in the headlines long past the expiration date of a minor rocker by promoting himself as a super-patriot who dresses up in camouflage gear and loves his guns and hates Obama. Ooooo weee, does he hate Obama, having called him a “subhuman mongrel.” The guy is a true Trumpie.

As for his claim to promote “family values,” Nugent has fathered several children by various unwed mothers (not to mention “adopting” an underage girl to get around statutory rape laws). And of course there’s his story of how he beat the draft after he pulled a bad number in the lottery by taking drugs and acting crazy and not bathing for weeks and covering himself with his own excrement before his draft physical. He has since said he was only bullshitting the interviewer, and now that being a draft dodger isn’t as cool as it used to be he has changed his story and claims he had student deferments and never got called. B-S. He’s exactly my age and I know the details of how the system worked (having worked it myself to do my time but avoid Vietnam) and his numbers and his time-line don’t add up. The records show the military gave him a 4-F, or “unfit for duty,”and never changed it. (It’s the same classification that goes to those who are severely handicapped, mentally retarded, or sexually perverse, which must be kind of embarrassing for  super-macho NRA guy like Nugent brags of being.) As Dick Cheney, another infamous draft dodger and chickenhawk once said of himself, Nugent had “other priorities.” If you really want a handle on Nugent’s character, you gotta check out his X-rated Dickipedia entry.

It was a major bummer when I read that Nugent was born in 1948, Class of ’66, making him an exact contemporary. I’ve always followed guys who were born in 1948 in order to compare my rate of physical deterioration with theirs. Through the 70s and 80s, I followed musician James Taylor (bald years ago), Prince Charles, David Eisenhower (grandson of Ike married to Tricia Nixon), and Steelers’ quarterback turned broadcaster Terry Bradshaw. Then, in the 80’s, I added newly-famous Sen. Al Gore, and in the 90’s, Clarence Thomas. There are of course many others, but those guys kept coming back in the news with updated photos on a regular basis, decade after decade, so there’s a photographic progression. (Another is Doonesbury creator Garry Trudeau, perhaps the greatest artist of my generation regardless of genre, but he’s notoriously camera-shy and I wouldn’t recognize him if I were alone with him in an elevator.) I’ve read that Nugent was in a one-shot-wonder group that had a minor hit in 1968 that I thought sucked, but I don’t remember hearing his name until three decades later after he became a spokes-douche for the NRA. Now I’m forced to watch him as he ages, a fellow 48er, as he’s found the secret to staying famous, not for his music, but for his assholish opinions and noxious personality. He and Trump are two of a kind, and, sad to say, neither are going away any time soon.

As for Trump, he had four 2-S deferments, which required that you be a college student making acceptable “progress” toward a degree, first at Fordham then transferring to the University of Pennsylvania. He graduated in 1968, at the very height of the Vietnam draft, and should have been called up ASAP. Back then, colleges submitted status reports to draft boards after every term or semester. If your deferment ended either with graduation or with your Grade Point Average dropping below 2.0, your weren’t making “progress” to your degree, and your Draft Board was automatically informed and sent you your Notice to Appear within a few short weeks. Unless of course you manage to finagle a medical “out,” which Trump did. Bone spurs in his heels, or so he says. There were lots of different medical “outs” (e.g., Clarence Thomas got out with curvature of the spine, and Rush Limbaugh had a “million-dollar butt pimple” [pylonytal cyst].)

When Nixon held the lottery over a year after he graduated Trump did luck out with a high number (356), but when questioned about it he outright lied, claiming his high number was why he didn’t serve and that he had been as worried as every other college guy the night of Nixon’s lottery. It made for a good story, and it was only after somebody pointed out to him that he could not possibly have watched Nixon’s lottery while he was in college (because he had graduated the year before) that Trump changed his tune and came up with his bone-spurs story.

Which brings me to the story below about the draft lottery that affected me and Trump and everybody I knew at the time in one way or another. My hope is that it will help those who missed the Vietnam war, and the anxiety of conscription, to gain an appreciation of what it was like to be draft bait for an undeclared and illegal war.

Audio and Text Excerpt from

Narrated by the Author