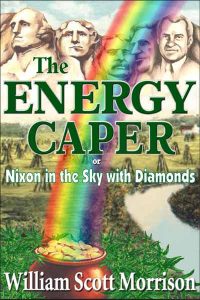 The Energy Caper, or Nixon in the Sky with Diamonds takes you on a merry romp with a band of idealistic twenty-somethings looking for love and hoping to change the world in an luckier universe in which the Kennedys were not assassinated and the Vietnam War ended before it began. Joining in the fun are President Richard Nixon and Dr. Timothy Leary, the escaped convict Nixon calls “the most dangerous man in the world” for turning America’s youth into no-good hippies.

This Nixon is the same profane, venal S-O-B that made him such a hit in our universe, but here he is unleashed in a world where there was no Vietnam war to slow him down and Watergate is just a fancy hotel. Elected on a pledge to wage an unrelenting “war on drugs,” Nixon instead confronts a different kind of war an energy war. The Arab oil embargo is driving the country toward a second Great Depression as motorists line up for hours to buy gasoline at any price.

Desperate for alternatives to oil, Nixon learns of a plant which produces three times more biomass per acre than corn. If it were grown for methanol, good old wood alcohol ­the same fuel used in Indianapolis racing cars ­America could farm its way to energy independence in just five short years. A secret weapon has dropped in Nixon’s lap, but he is shocked to learn that, under another name, the secret weapon which could defeat the oil cartel is a primary target of his War on Drugs. If he can lead America to energy independence by convincing conservatives to legalize cultivation of the plant Thomas Jefferson called “America’s most valuable crop” in the name of national security, the final spot on Mount Rushmore will be his. Nixon knows that only a law-and-order, hippie-bashing conservative like himself could hope to buck America’s richest families and most powerful corporations to pull off a caper this crazy.

What others say about The Energy Caper

“It is deliciously funny, ingeniously imaginative…a pleasure to read. It reminds me of Vonnegut and Joseph Heller and other writers who have an antic, comic way of making people think about serious matters. …bold, unabashed style, direct and strong–we need more of that!”

Howard Zinn, Ph.D., author of A People’s History of America.

“The world as it might have been. What fun!”

“Morrison has produced a rollicking, picaresque yarn, featuring Richard Nixon, Timothy Leary and assorted rogues and rascals, real and fictional, from the Sixties, as well as generous dollops of sex, drugs and rock n’ roll…an alternative world that might have been, If instead of a “war on drugs”, we used the noble hemp plant to win our energy-independence and regenerate the American economy. Makes you laugh at the imagined real possibilities while you weep at the missed real opportunities. A truly enjoyable read!”

Ralph Metzner, Ph.D., author of many books and co-author (with Timothy Leary and Richard Alpert) of The Psychedelic Experience.

“With wit, humor, and great imagination, Morrison creates an alternative history. Culture clashes, conservative versus liberal, and energy issues make this a most timely novel. Morrison’s characters, whether they are historical or created, are comical and convincing.”

“I have read this book with great interest. In the 1970s I was at the center of the battle by the oil companies to keep practical alternative fuels like methanol off the national energy agenda while permitting politically attractive corn ethanol to rise, and now fall, on its false premises. The Energy Caper explores how different the world would be if Nixon had kept his eye on being a great president. What fun it is to play ‘what if’ with an author who experienced those chaotic times.”

“In writing a whimsical DaVinci Code for hempsters Morrison unravels the hemp conspiracy with terrific style and imagination. The Energy Caper is a fun read even if you know nothing about hemp and just like a well-told story.”

“The depiction of Nixon’s historical histrionics is hilarious!”

Print versions can be ordered at your local book store.

Print or Kindle versions available on line  at Amazon.com.

Print or Nook versions available on line at Barnes and Noble.com.

Other eBook formats available at many retailers.

or
Nixon in the Sky with Diamonds

A tale of what might have been, and still could be.

Just double-click on the sign and print it out on your inkjet printer for a perfect window sign.