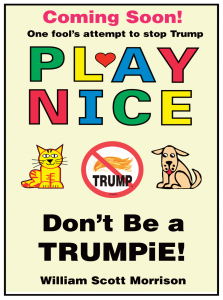 On Monday (the day before election day) I checked the calendar and saw that this coming Friday is Veterans’ Day. It reminded me that I had met my wife on a Veterans Day weekend exactly twenty years ago in a writing workshop at a rustic retreat in the Santa Cruz mountains. My wife likes romantic stuff, so a surprise dinner out on a milestone anniversary would get me some brownie points.

I am certain that we met on a Friday, but I had no recollection of the exact date. I knew it should be this week, so I Googled it up, and in 1996 that Friday fell on Nov. 8—which this year happened to be tomorrow, Election Day. Hey honey, guess what….

She was thrilled and dollied up with hair-stuff and fancy earrings. I trimmed my beard and we went out for an early dinner to celebrate our initial meeting, planning to come back home to relax and leisurely watch the election returns. What could go wrong?

Couples are often asked how they met, and our story is pretty unique. I had recently joined a writing group comprised mostly of Vietnam vets, and when a four-day writing retreat was announced at the group, it sounded ideal: bring a sleeping bag and spend a long weekend writing in the redwoods.

I arrived just before dinner, missing the events of the first day as I knew I would. There was a long line to the cafeteria comprised of many more people than in our group. I said hello to someone at the end of the line, and he said, “You’re not supposed to talk.”

I said, “But isn’t this a writing workshop?”

Somebody showed me a flyer, which read something like: “Three-day silent meditation retreat and veterans writing workshop.” I’d overlooked the “silent meditation” part completely.

What was I doing at a silent retreat? I don’t meditate. Too hyper. No way I would have signed up if I’d thought we couldn’t talk for four days, but I had already paid, so it was too late to bail out.

We filed into the dining hall in silent, Buddhistic fashion, filling up the seats in the order in which we entered. I found myself at a table with eleven strangers. There were perhaps 150 of us, and we all endured a tasteless veggie meal while eating in excruciating silence.

Finally, a gong rang out and somebody said, “You may talk now.”

I instantly struck up a conversation with the older guy next to me, who turned out to be a WWII bomber pilot with a Ph.D. in psychology. He said that he and the woman with him, who was about my age and who also taught psychology, were colleagues and meditation buddies. I said I had no idea that it was a silent weekend and that I would never have come had I known. She said she thought it was simply a meditation retreat and probably would not have come if she had known it was also a writing workshop.

The next day, they gave us a writing prompt and we dispersed to write, no chatting. After a silent lunch, the organizers divided us into “dharma groups” of ten or so where we were given prompts and encouraged to talk. At last. Again by random luck, the woman and I were in the same group.

She and I seemed to get along, and a couple of years later she foolishly married me, with the WWII pilot performing the ceremony. Our 18th wedding anniversary is coming up next year.

So what should have been a fondly recalled anniversary will instead be bleached into our memories as a night of mourning.

My feelings of despair are probably not remotely close to what’s in the guts of America’s minorities as they wake up and stare into the alt-right American future. I’m a kind of minority myself, thanks to my pony tail. Believe it or not, there’s still a lot of anti-hippie prejudice out there, even here in California, and it’s really noticeable when I’m visiting back home in Pennsylvania. It’s lucky for me I’m a white guy, so if I chop it off and get some kind of gooped-up “modern” cut I can easily blend in if things get too bad. As far as religion, I was baptized as a Presbyterian, just like Trump, so I should be safe on that front until they check attendance records.

The radio newscast says there are Not-My-President demonstrations going on all over the country, and on the internet women are being warned by Planned Parenthood to hurry up and get birth control that can outlast Trump. Apparently some of the better IUDs can last 10–12 years. Who knew?

On the other hand, for women who do want to get pregnant, the advice is to get on the stick right now before the pre-natal care provisions of Obamacare are repealed. My first thought on reading that took me back to the ancient TV game show Beat the Clock.

I despair for millennials and the nick-nameless generation that is still of school age who will have to live in the world after he’s gone. Most of them don’t have enough experience with how conservative politicians operate, let alone understand their moneyed motives, to have a clue just how afraid they should be of the policies that will soon wreck their lives now that the wingnuts have full control of the presidency and both houses of Congress. Dark Ages, here we come.

On the personal bright side, I’m sixty-eight, so there’s not a lot of long-term damage the Trumpies can do to me short of starting an atomic war and wasting the whole planet. It’s not like I’m twenty-two and Nixon is threatening to send me to Vietnam. On the global-warming bright side, a war would bring on Nuclear Winter, which would solve the global warming problem once life regenerated. If the Trumpies forgo nuclear war, their economic plan of going all out for oil and coal and roadblocking renewable energy will accelerate the warming and fry the planet in a hundred years or so. Their stockholders will clean up in the short term, and by the time the results of their policies fully kick in I, along with Trump, who at 70 is about a year older than I am, will be gone.

Then again, maybe I should worry. He’ll need recruits for the Deportation Corps and could resort to deputizing ex-military to help loyal citizens round up the usual suspects in our local neighborhoods. Here in wine country there is no shortage of suspects everywhere you look—in the vineyards, in the restaurants, hanging out on “job corners.” I’ve sometimes wondered what percentage of the workers pruning vines are here illegally. He’ll need a lot of manpower to round up eleven million deportees, and as a former U.S. Army MP I’d be a prime candidate to fill the ranks of the Deportation Corps despite my age. It could become a well-paid government side-job, like a census-taker.

Trump has promised to privatize the VA, which I have used since 1972, so maybe I should be worried about that too? The VA health care system, which used to be terrible until the late 1990s, works great these days for those like me who are already in the system. The wingnuts calling for privatization are opposed by every veterans group, but the VA is a potential source of enormous profits. So maybe I’d better stop being cheap and sign up to have Medicare deducted from my Social Security check as a backup during the next enrollment period in case Trump sells off the VA to the highest bidder. Medicare has even more constituents than the VA, so in theory it should have a better chance of surviving a Republican wipe-out until after I expire.

I crawled under the covers before the election was officially over, no longer able to abide the talking-heads and the red-hued maps to stay up till the bitter end. A friend had called just after Ohio went red but while North Carolina was still hanging on in shades of CNN pink. We commiserated for a while until I said I have to hang up. I just can’t bear to talk about it right now. Soon another friend called, but I just let it ring. I had nothing to say and didn’t want to hear anyone else’s miseries.

My wife suggested that I stay away from the computer today and get outside, do some yard work. As a psychologist she’s had a lot of practice making professional suggestions to depressed clients, so when I finally dragged my ass out of bed, that’s what I did.

We’ve had a lot of rain already, and the dry summer grasses are newly alive in bright greens under the falling leaves. The day is clear and sunny, in the seventies. Close to perfect. On the property next door are several Rome apple trees. It’s a very late apple, and there are still many on the branches, crunchy and juicy.