I haven’t had much to say in the last few weeks. A birthday, hosting guests and a general sense of ennui with all things Trump have  contributed to my inherent laziness. I was grateful for the failure of TrumpCare, and I did check out the legalities of  Trump trademarking “Keep America Great” and how it would affect the Keep America Great, Don’t Be a TRUMPiE! buttons and stickers.

It seems Trump can trademark it, but I’ll be able to use it in conjunction with Don’t Be a TRUMPiE because it’s an obvious parody and there would be no prospect of consumer confusion. There are other options for trademarking but there’s no money in bumper stickers so I’m not going to pursue it, though I will keep adding items to the NoTrumpZone stores at CafePress and Zazzle. Perhaps I’ll do a Kickstarter idea before the 2018 elections.

I need to focus on something other than Trump, and I don’t want to start another novel right now as I’m still figuring out how to promote the first two. But I need something to work on other than marketing and websites, and this Trumpie ennui seems to be leading me to another songwriting cycle of political tunes and/or becoming proficient enough on the guitar to perform my dozens of non-political songs for a respectable YouTube songwriter demo.

My problem has always been my guitar playing, but I’ve started playing again for the first time in over a year. I’ve got my calluses back, but I’m as fumbling and inept as ever. It’s frustrating that I just don’t seem to improve.

I often say that my style is “Three chords and a cloud of dust,” a takeoff on the famous “three yards and a cloud of dust” saying when I was a kid about the Big Ten style of football. I’ve never really applied myself to the guitar, always getting distracted by songwriting and business and never truly progressing as a player and blaming it on my natural klutziness. Maybe it’s time for lessons. I don’t need to be Eric Clapton, I only need to accompany myself on my own songs without my irregular sense of rhythm and lack of fine-motor control in my fingers getting in the way.

As I ruminate about my woeful guitar skills I think I’ll take the opportunity to write about my late friend and business partner on The Guitar Poster, Keith Allen, who was the world’s all-time best guitar teacher and perhaps the best teacher I ever had in any subject. I consulted him on all my songs, coaxed him into playing on several in the studio, but I never took an actual lesson from him and never really practiced the many things he did show me in between poster sessions as I was always too wrapped up in trying to make the business work. My failure to take full advantage of Keith as a teacher is one of my great regrets.

I’m really reluctant to look for a guitar teacher because I would always be comparing them to Keith. 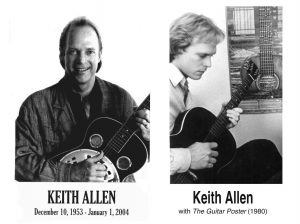 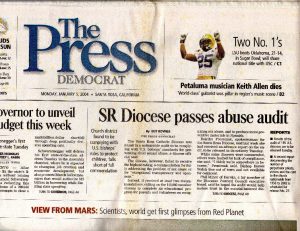 Keith Allen, a respected and versatile guitarist known for his generous and kind spirit, died of an apparent heart attack Monday at his Petaluma home. He was 50.

Allen was a “world-class” guitarist, a successful music teacher and a pillar in the Northern California music community for nearly 30 years, said longtime friend and fellow musician Frank Hayhurst, owner of Zone Music. Because he wouldn’t sacrifice time with his family to go on the road for months at a time, Allen wasn’t as well known as Eric Clapton or Stevie Ray Vaughn, but he was equally good, Hayhurst said.

Allen wrote and recorded in many styles, and could play anything from classical to jazz to rock ‘n’ roll, Hayhurst said. “He was a flame-thrower of a player — a brilliant technician — and he had heart,” Hayhurst said. “He was easily as good as Stevie Ray Vaughn and Eric Clapton. He was a world-class guitar player.”

Allen was an early faculty member at Blue Bear Music in San Francisco and built a private teaching practice over the years. He also authored a series of music education publications: the Guitar Poster, the Bass Poster, the Keyboard Poster and the Rock Guitar Poster.

His ability as a musician was equalled by his patience as a teacher and his passion for encouraging young people to love music as he did.

“He made everyone feel special. He had that ability, that warmth that made people feel close to him. He genuinely cared about people,” said his wife, Diana Kay of Petaluma.

Allen was a part of Musicians Helping Musicians, a group that helps members in times of health crisis. “He was always the first in line, supporting people in their need,” Hayhurst said.

In addition to his wife, Allen is survived by a 2-year-old daughter, Leah Allen Kay of Petaluma, and two sons, Jackson Allen of Cotati and Tom Allen of Berkeley.

He also leaves his parents, Thomas and Patricia Allen of Davis; a brother, Tim Allen of Ashland, Ore.; and two sisters, Jacquelyn Trautt of Long Beach and Kathleen Rodgers of Nelson, British Columbia.

A potluck musical celebration of Allen’s life will be held Sunday from 4 to 11 p.m. at the Jewish Community Center, 85 La Plaza in Cotati. For more information, call Zone Music at 664-1213.

The text below is from our fund-raising flyer at Keith’s memorial celebration a few months later.

Keith Allen was not only a great guitarist, he was a music educator of the highest order. Those who were fortunate enough to have him as a guitar teacher know how he always knew exactly what you needed to do to get to the next stage. But what sets Keith apart from all other instructors is the comprehensive music theory system, a kind of roadmap to harmony for the guitar, to which he contributed so much.

In 1975, at the age of twenty, the guitar method he developed, the C-A-G-E-D system, was written up in Guitar Player Magazine as the best approach to mastering the instrument. In 1979, when a group of us were working on an idea for putting everything you needed to know about guitar on a poster, somebody told us, “If you want to take it to the next level, you’ve just got to talk to Keith Allen.”

We did, and when Keith took a look at the prototype he sat down then and there and roughed out what would become the Chord and Scale Table. He became the music editor, and oversaw the development of the cross-reference system that shows how to find and play any chord or scale, in any key, anywhere on the instrument. Twenty-five years later, The Guitar Poster is still the most complete guide to the guitar ever made.

Over the years Keith wrote and edited other posters for keyboard, rock guitar, electric bass, and saxophone. If you play, you need a poster. And they make great gifts. You can help Keith’s wife Diane raise their two-year old daughter, Leah, and honor his memory through the spirit of his music educator’s genius. All the posters Keith helped to create are available here. All proceeds go to the Keith Allen Fund. 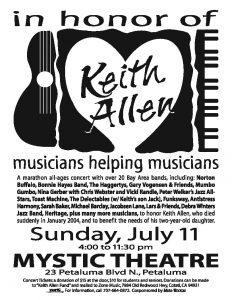